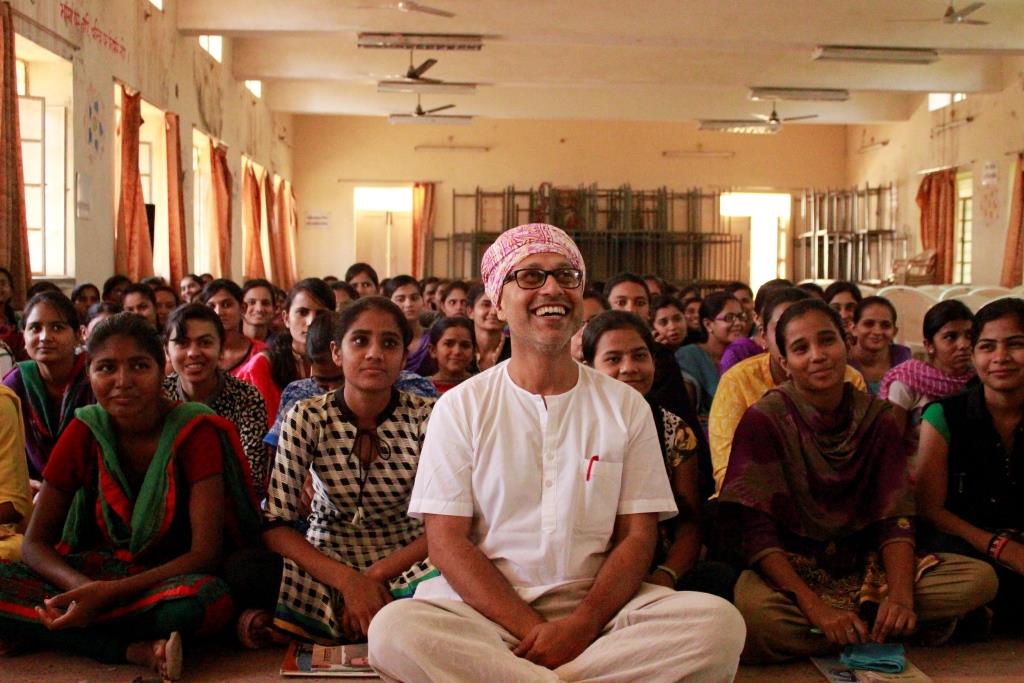 On 2nd October Delhi team set forth for their visit to Barmer district. Apart from the team Osama Manzar (Founder- Director of Digital Empowerment Foundation) and Radhika from (Shiksha Ka Sawal) also accompanied in the journey. While on the way the team met Barmer Boys (a popular band in folk music genre); who played folk music throughout the night and entertained everyone.
Visit to Senior Secondary school, Barmer, Rajasthan
During the school visit, Mr Osama Manzar filed RTI in the presence of school authorities, members of Shiksha Ka Sawal campaign, media personals of Rajasthan Patrika and Soochna Seva team.
In the RTI application a brief report was asked for the following sections:- • Number of students present in the year 2014-2015, number of students per class wise, number of students promoted to next class and number of drop-outs.
• Number of teacher’s posts available and number of vacant seats, number of teachers available in the school, number of teachers available for primary and secondary classes.
• Availability of playground, lease document of the playground, quality of the playground and presence of a boundary wall, entire status of the playground.
• Number of toilets for girls, boys and staff, separate toilets for boys and girls, status of the functioning toilets, presence of roof in all the toilets, distance between the girl’s and boy’s toilet and proper arrangement of the water source.
• Source of proper water supply, cleanliness of water tanks, quality of drinking water and proper water management.
• Presence of School Management Committees (SMCs), list of members and their numbers. List of meetings conducted in the year 2014-2015 and resolutions planned.
• The copy of School Development Plan.
After filing the RTI, the group visited different classes. Osama Manzar interacted with the students and encouraged them to study and spread their learning. He also explained the importance of computer in today’s generation and how Indians can device innovative ways to help the unfortunate. He also briefed the students about Digital Empowerment Foundation and the digital literacy provided by the foundation at nominal charges.
The team visited computer lab and found that there was no teacher to teach the students. So the students who knew computer took an initiative to teach other students. Also, the class in which teacher is absent is converted into a computer class and anyone who is free (student or teacher proficient in computer) teaches the students.
The principal briefed about the school and number of teachers present. About, 27 teaching staffs are present and 5 positions are vacant. Out of 550-600 students the number of girls is only 30. In 1989, the school had around 5000 students and teaching staff was more than 100.
Meet with students at Multanmal Bheekchand Girls Inter College, Barmer
Rajasthan Patrika Media Action Group and Shiksha Ka Sawal (SKS) has collective organised a meet called ‘Neev VyakhyanMala’ at Multanmal Bheekchand Girls Inter College. This meeting is a part of the year-long campaign which is organised by SKS and Rajasthan Patrika. The campaign kick-started in March 2015 and will continue till February 2016. It uses RTI as a mean to initiate citizen monitoring of government schools and public education across the state.
Mr Osama Manzar was chief speaker of the meeting. He gave a brief overview of DEF and project implementing of Soochna Seva in Barmer which was followed by discussion on services related to ICT. He spoke about the importance of women education and the dire need of improvement in the same. He stressed on the fact that poor education facility, lack of teachers, poor water management and improper sanitation facility hampers progress of the students.