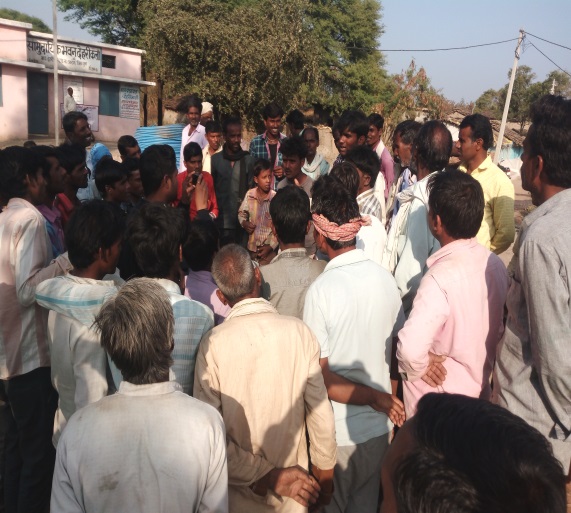 Ever since its inception, the Soochna Seva has demonstrated a strong commitment towards the rural development by ensuring digital interventions and implementation of development programs. To create a sustainable model for  livelihood opportunities available in various sectors at the grass-roots level has always been a top-priority. To continue the tradition, Soochna Seva Kendra, aron recently organised a ‘Right to information camp to improve the socio-economic development and provide adequate solutions to the employment-based queries of the residents of Dehrikala village (Kherkhedi, Jatvpura, Chopana, Aankhheda, Govindpur).

Digitally equipped soochna vahan was used for the promotion of the Camp. 2 days prior to the event Soochna vahan covered major populated villages near Aaron. The motivation was to spread the information about the event among maximum target population to ensure huge footfall on the day of the event. The promotion was also useful in making the target audience aware of the importance and purpose of the camp activity. This helped villagers to gather crucial documents and application requisites and prepare for the camp in advance. The Soochna Seva fellows Shishir and Nagendra brought local administration in the activity loop and sought a formal permission from the aron district panchayat officer Mr. Naval Singh Meena. The official permission also brought the much-needed credibility to the event and helped in a smooth flow of the activities planned for the event.

The camp was held on 15 November 2016 and the registration process started by 10 am.  The turnout for the camp was overwhelming and since morning community people from far-off areas started pouring in to register their grievances.  The camp volunteers were adequately trained for this rush hour and handled every individual query with full attention. The fellows took a one-on-one session with all the participants and listened to their complaints and documented it in their databases for further research purpose. The team armed with almost all the major government schemes and entitlements forms also filled out the application forms on behalf of villagers.

The staff received a huge number of feedbacks. All the feedbacks were carefully considered and most of them were incorporated into a complaint draft. The team purpose was to revisit all these complaints soon and become a vanguard of the holistic development of the rural people. This document will help Soochna seva to map and reach out to all the concerned departments of government and take up all these serious issues with them and enable backward people for a better life.

The event went on till late in the evening and total 173 applications were registered. Few applications were found to be incorrect as the applicant request for a particular scheme and entitlements were not meeting his/her criteria for socio-economic status listed by the government. The applicant’s details under specific schemes were matched on the eligibility criteria mentioned on Samagra portal. Once the applications were proof-read and attached with requisite documents were immediately dispatched to the concerned departments.

The camp activity had its share of some dramatic moments too. The villagers who attended camp reported that one person alone in Dehrikala village is actually accessing ration entitled for 18 persons by fraudulent means. The team with some local community members went to the SDM and police station to report the fraud. But nothing happened on the ground. Later, everyone escalated the issue with the collector office, Guna. The authorities in the office took stern steps and ordered the immediate suspension of village Dehrikala secretary.  An F.I.R against the accused, Dinesh ahirwar, was also simultaneously registered in the local police station. Dinesh, tried to communalize and politicized the issue and reported against Soochna seva in the Scheduled caste welfare department and even threatened a fellow rajpal kevat with dire consequences if he fails to withdraw complaints against him in the police station. Later, some applicants thanked SSK for their efforts as they have received their food slip which has indeed made their life a little easy.

Report on the progress of Camp activity has shown impressive numbers. Dehrikala, aron received 173 applications and by 15/11/16, total 86 applicants started receiving their benefits under the various schemes.

On 22nd December 2016, a similar camp activity was organized at Rampur panchayat bhavan, Bamori block where 69 grievances have been received in which 30 applicants have started receiving the benefits and 39 cases are in process.