Soochna Seva(SS) team received regular complaints from local people that the health centre at Umri village in Guna district is not functioning properly and being the only hub for medical treatment in nearby villages, it is the lifeline for the people. The team comprehended that the situation is not appropriate so they visited the centre and tried to figure out ways to resolve matters from their end.

The claims by locals turned out to be true as the health centre has been facing regular problems over unhygienic conditions, poor diet chart, improper water and electricity supply and irregular staffs. Therefore, to eradicate these loopholes, SS team intervened and reported senior officials of the health department through letters. Initially the department did not pay heed to those letters so the team thought of meeting the officials personally. But again their efforts were futile in their first go, therefore to propagate their movement for betterment of the electric poles and wires the team marched into the department for every alternate day. Their activism and constant monitoring forced officials to take immediate steps.

Within a week the staff of health centre began coming on time and were also regular in the service. But the problem of water supply still persisted. The officials at health department notified Soochna Seva team that the responsibility of installing a tube-well was given to a contractor and due to his lack of action no work has been done so far. To bring back the work in line, Gram Panchayat representative, some locals and Soochna Seva team gathered outside the contractor’s office and demanded him to initiate the process fast. The impact of this monitoring triggered the work of tube-well installation and within two days the task was complete. 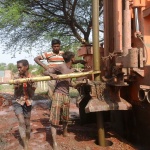 People working to fix the tube-well 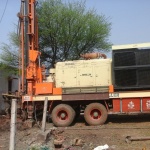 The team is still working in perfecting the diet chart as the concerned officer has been on vacation for more than a month. But the work of SS team brought relief for many people and they received accolades from Gram Panchayat Representative.