“Police-Public Relation Camp” on June8, 2015 by the efforts of Soochna Seva Team in Hesatu, Ranchi.

You are here:
June 23, 2015Leave a commentActivity-Ranchi, Event & Activities1By admin

“If you are in trouble, we are there to assist you and request you to approach us when in need”, explained  by Shivji Singh, sub-inspector of Hesatu Police Station, in a ‘Police-Public Relation Camp’ organised by Sooochna Seva in Hesatu , Agara block of Ranchi district on June 8, 2015.

The camp was planned after the people repeatedly expressed their misconceptions about the police to Sochna Seva Team. “They have assumed wrongly that police will demand money if anyone goes to police station to lodge their complaint”, as one of our Soochna Sevak reports. Sub-Inspector welcomed by SHG group. The flowers are from home-garden.

He adds, “Situation is saddening in this area, as people hesitate to admit any injured person to hospital or even provide first-aid because of the treat that linger among them. The fear from police is at large among the masses therefore, we decided to spearhead such a camp that can bridge the gap of communication and enhance information about police-public relation.”

So, on June 8, 2015 around 200 women from different self-help groups (SHG) attended the camp. Even Gram Panchayat Representatives, Bhanu Devi (Mukhiya) and Rajesh Pahan (Upmukhiya) also graced the occasion with their presence.

The camp continued for one and half hour, which was quite interactive and informative as well. Queries of the women from SHGs like Khushboo Mahila Samiti, Birsa Mahila Vikash Samiti, Deepjoti Mahila Samiti etc, came up every now and then but those did not go unanswered.

It was a unique camp of its own in that area and people of Hesatu seems to be contented by the efforts of Soochna Seva Team. 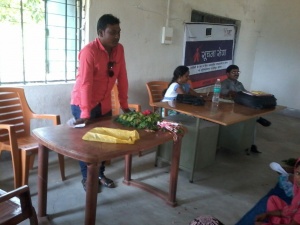 Upmukhiya, Rajesh Pahan expressing his views about the camp. 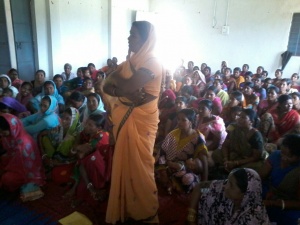 Questions popped by one of the participant.